by 198 Japan News
in JAPAN TECHNOLOGY NEWS
Reading Time: 3 mins read
A A
0

Japan is right in the middle of one of its hottest summers on record. So if you’re looking to stay out of the scorching sun, staying at home and playing some video games seems like a good way to do it, but if the Switch is your platform of choice, there are a few things to watch out for, Nintendo says.

On Monday the Kyoto-based company sent out a tweet reminding gamers that if it’s hot enough for you to be feeling uncomfortable, the same probably goes for your Switch. Specifically, Nintendo warns against using the system in environments where the temperature is above 35 degrees Celsius (95 degrees Fahrenheit).

▼ The tweet also warns against using the Switch at temperatures below 5 degrees Celsius but that’s not really something anyone in Japan has to worry about right now. 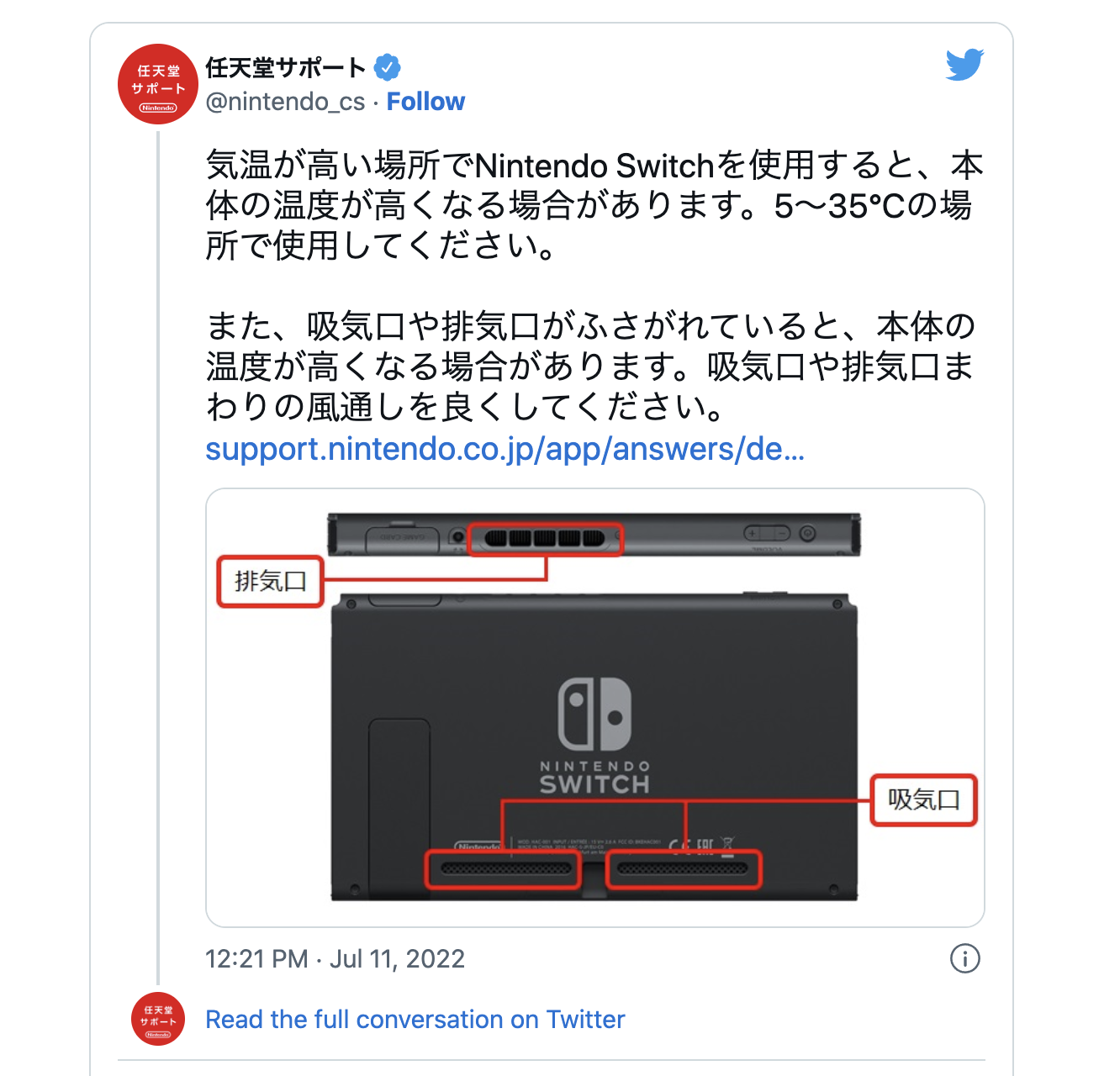 In addition, Nintendo reminded gamers to check that the unit’s air intake (located on the top edge, next to the cartridge slot) and exhaust ports (found at the bottom of the system’s backside) are clean and unobstructed. This is actually good advice at any time of year, but it’s particularly important in the summer, since blockages can increase the Switch’s running temperature and bring it up closer to the 35-degree limit. If the intake/exhaust ports are starting to get clogged with dust, Nintendo says to give them a vacuuming to clear them out (but doesn’t mention whether or not you’ll see better results if you dress in Luigi’s Mansion-style cosplay for the process). The company also cautions those playing with their Switch in docked mode to keep the dock somewhere with ample air flow that won’t get too hot, so someplace out of any direct sunlight coming in through the window is probably best. 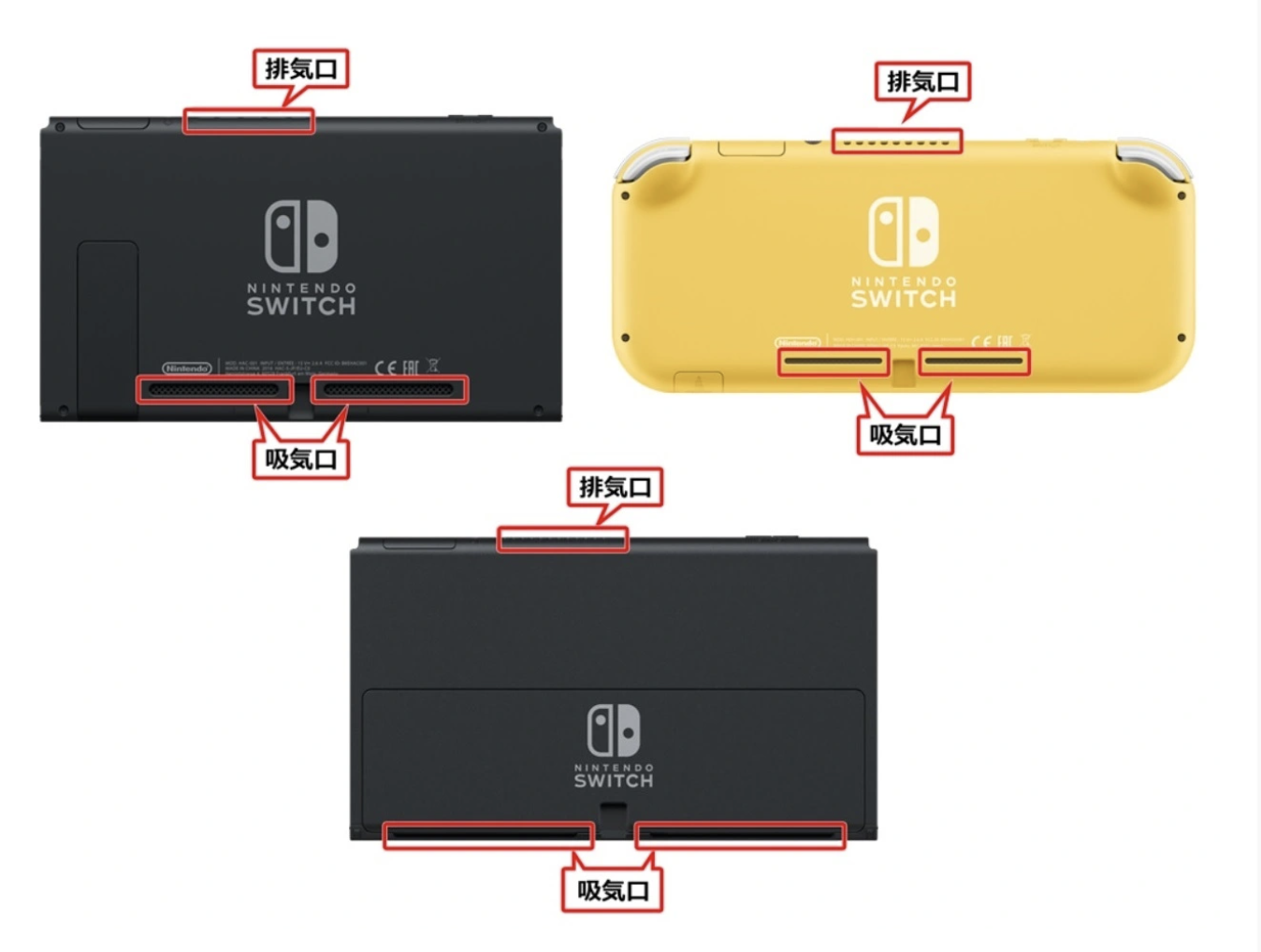 Thankfully, the Switch does have a built-in failsafe of sorts against overheating, as Nintendo says that the system may automatically go into sleep mode if it gets too hot. Since that’s a last resort, though, it’s probably a good idea to take countermeasures before things get to that point, whether that means cranking up the AC or cutting your gaming session short.

With several parts of Japan having experienced 35-degree-plus heat this summer, Nintendo’s warning is one that Japanese Twitter users have been taking note of, leaving comments like:

“Ah, so that’s why it went into sleep mode all of a sudden while I was playing Monster Hunter!”

“When I play in handheld mode, I rest the Switch on top of a cushion on my lap, and the exhaust ports gets really noisy. Guess the cushion is blocking the air flow?”

“Wait, those are exhaust ports on the back? I thought they were the speakers.”

“Oh man, I’ve been leaving my dock in a part of the room that gets really hot!”

“So no more playing games in unairconditioned rooms.”

In regards to the last comment, as hot and humid as Japan gets in the summer, a lot of Japanese people are averse to running their air conditioners for extended periods of time, with folk wisdom holding that it’s unhealthy to be exposed to so much AC. Setting that issue aside, though, it’s definitely not good for your Switch to have to deal with operating in high temperatures, though, so those who want to keep their air conditioner off might want to do the same with their Switch during the hottest part of the day.

On the other hand, though, it’s also not good for the Switch to stay powered down for too long, so firing it up now and again, at least at night after temperatures have cooled down, is important too.

For the longest time we’ve been using UPC bar codes to store strings of information in a compact space on both product labels and people in dystopian sci-fi movies. But...

Long gone is the heyday of the lavishly decorated Japanese big-rigs known as dekotora. Once a symbol of blue-collar ideals in the pre-bubble era, the art and culture of truckers...