Japanese Defense Minister Nobuo Kishi said Wednesday during talks with his ASEAN counterparts that maintaining a rules-based international order in the Indo-Pacific region is important, apparently with China’s growing maritime assertiveness in mind.

In pushing for Japan’s vision of a “free and open” Indo-Pacific, Kishi called for a regional code of conduct in the South China Sea to be “effective, substantial and consistent with international law,” his ministry said in a press release.

The Association of Southeast Asian Nations and Beijing are crafting the code of conduct to defuse tensions in the disputed areas.

The talks in Phnom Penh came as Japan aims to further enhance security relations with the 10-member regional group, at a time when China is extending its military influence in the region. 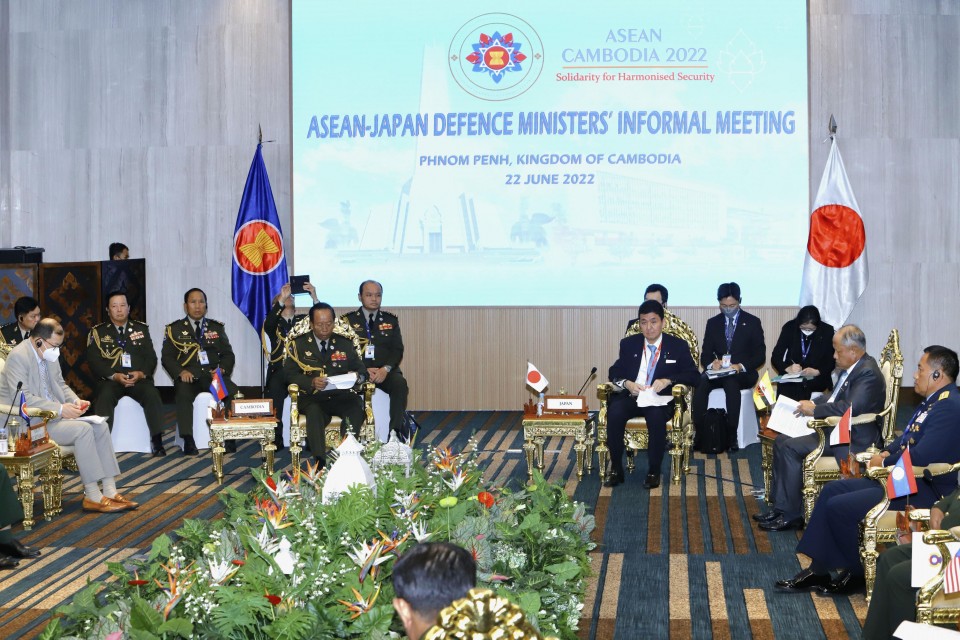 Southeast Asia is a strategically important region that straddles key sea lanes, including the South China Sea where some of the members have territorial disputes with Beijing.

In Cambodia, new ship-repairing facilities at Ream Naval Base located on the Gulf of Thailand are under construction with Chinese financial support. Cambodia’s defense minister has denied the presence of Chinese forces at the base.

Referring to Russia’s ongoing invasion of Ukraine, Kishi told a press conference after the talks that the “unilateral change of the status quo by force” does not only concern Europe and could also happen in the Indo-Pacific in the future.

“We shared such concern with ASEAN nations,” Kishi said, adding Japan held specific discussions with them to build reciprocal partnerships with each country.

Kishi also pledged Japan’s continued security cooperation with ASEAN including providing defense equipment for the bloc’s members based on their needs, the ministry said.

At the first in-person meeting between Japanese and ASEAN defense chiefs since November 2019, they also talked about boosting their cybersecurity capabilities, according to the ministry.

Kishi was quoted by the ministry as expressing concern over the situation in Myanmar, saying there is no improvement since the February 2021 coup put the nation under military rule. He also urged the Myanmar military to immediately halt violence.

The Japan-ASEAN defense talks were held on the sidelines of the ASEAN Defense Ministers’ Meeting in the Cambodian capital.

Kishi was on a two-day visit to Cambodia from Tuesday, when he held separate meetings with his counterparts from Cambodia, Indonesia, Brunei and Vietnam. Earlier Wednesday, the Japanese minister met with Cambodian Prime Minister Hun Sen.

The 5 best films from the 2022 Sydney Film Festival

Japan concerned over Cambodia naval base modernizing with Chinese aid

The 5 best films from the 2022 Sydney Film Festival

Back to June again, after the disruption of the last couple of years, and the twin festivals of light - Vivid and the Sydney Film Festival - once...

A Japanese court dismissed Monday a damages lawsuit claiming the government's ban on same-sex marriage is unconstitutional, in contrast to a historic ruling last year that recognized it...

Japan's mistake-laden debacle against Tunisia on Tuesday night was bad enough to debunk most of the positives that surrounded Hajime Moriyasu's Samurai Blue prior to the Kirin Cup...