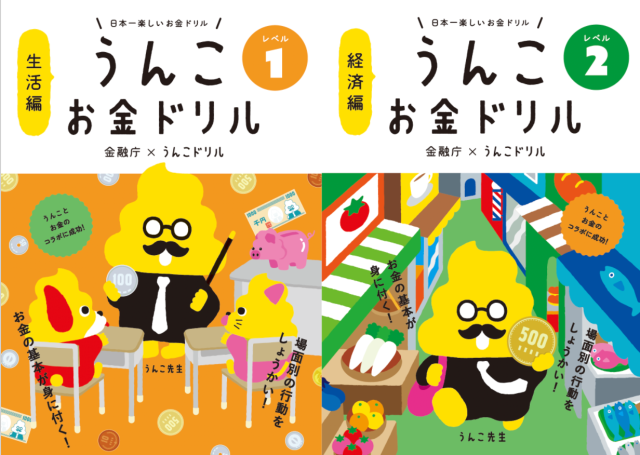 Everyone wants a piece of Poop Money.

This is thanks to the hit series of educational Poop Drill (Unko Drill) books, which began back in 2017 with the hugely successful Poop Kanji Drill. It has since spawned an entire poop-themed educational media empire.

The latest installment of this is the Poop Money Drill, which teaches kids financial literacy. Poop Money Drill is divided into two books: an “Economy Edition” that explains the importance of circulating money in a society; and a “Life Edition” that focuses on personal financial matters. Together they cover a wide range of concepts, from cooling-off periods to excessive borrowing, in poop.

▼ In this section, teacher poop has poop-dog and poop-cat brainstorm things you can do with money besides spending it, and violates the old saying that “money doesn’t grow on trees” in the process

Speaking of financial matters, there aren’t any with Poop Money Drill, because it is being distributed for free by the Financial Services Agency (FSA) nationwide to all who apply. The FSA is tasked with stabilizing the Japanese financial system so has a vested interest in educating the public on how to keep it moving.

However, they grossly underestimated the demand for free poop and have had to suspend orders until they can catch up. Actually, the books had been distributed since last April, and according to the FSA outflow was very regular at about 10 orders per day. It wasn’t until 16 June that orders skyrocketed by about 1,000 times.

Although the FSA is thrilled that so many parents have taken an interest in teaching their kids about economic matters, there was no way they could release that many books. It’s expected to take about a month and a whole bunch of paper fiber to clear out this blockage.

Online comments were also surprised by the news, less by the sudden demand than by the fact that Poop Money Drill was even a thing. Others questioned the economic sense of the FSA themselves, for the way the material is being distributed.

“The FSA made this?!”
“I want this for my kids!”
“I think it’s wonderful that kids get involved in this, and it is definitely important to teach them.”
“I think it’s interesting that adults don’t talk about money in the same way they don’t talk about poop. This book confronts both taboos at the same time.”
“Why don’t they just put it out as a PDF on the website? It’s cheaper and better for the environment.”
“My kids love poop!”
“I’m glad I got mine early!”
“Money is just like poop. You have to handle both very carefully.”
“If it’s so popular, they should probably charge for it. That would be the first lesson in economics.”

The FSA vows to get things moving again as soon as possible and will continue to offer the book in the future as well. In the meantime, we can take relief in the fact that the online version of Poop Money Drill is still available at the Poop Campus (Unkogakuen) website, and also free of charge.

▼ Poop Money Drill #7: “You would like more people to be happy from your poop-shaped cookies. What can you do?”
A) Come up with a new poop-shaped cookie
B) Increase the workers at the store
C) Sell overseas as “Popular in Japan!”
D) Donate a part of the sale

And there’s also the many other types of Poop Drill books to choose from, such as Poop Traffic Safety Drill, Poop Disaster Prevention Drill, Poop Toilet Etiquette Drill, and Poop SDGs Drill, as well as ancillary Poop goods like the Poop Drill toilet paper and Poop Drill gummies.

Whatever you do, just don’t resort to actual poop to teach your children. I’m still not allowed back in the house because of that.

Sapporo U.S.A. to acquire Stone Brewing as it moves to speed up global expansion

Commodities will get intense scrutiny for the rest of 2022 after a first half dominated by the supply turmoil and inflationary shocks unleashed by Russia’s attack on Ukraine....

Sapporo U.S.A. to acquire Stone Brewing as it moves to speed up global expansion

Sapporo U.S.A., a subsidiary of the major Japanese beer-maker, on Friday announced a $168 million acquisition of Stone Brewing, an iconic U.S. craft brewery. The acquisition, slated to...

SMBC Nikko Securities Inc. said Friday an investigation panel looking into the major Japanese brokerage’s trading scandal has called it an “inappropriate and unjust act,” adding that the...

Toyota Motor shares slipped after it recalled some of its first mass-made all-electric cars, launched two months ago, because of a risk of wheels coming loose, a setback...