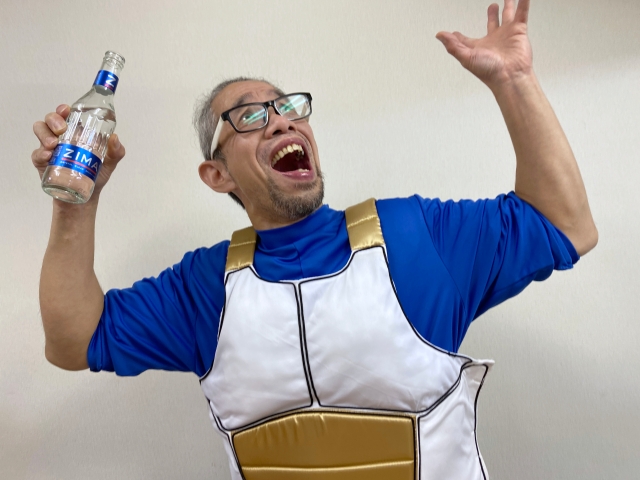 Gen Xers in western countries will probably vividly remember the alcoholic beverage Zima that first appeared in North America in the ’90s. At that time, clear products like Pepsis and Game Boys were all the rage, and Coors decided to jump on the bandwagon with their own clear beer…ish…y beverage.

▼ The original commercials had a spokesperson who pronounced his Ss as Zs.

The result was some lower-grade Coors beer that was filtered to the point that all color was gone. The flavor, which had also been filtered out, was then replaced with artificial citrus ones to create Zima. Released in 1993 with Coors heavily marketing it as a revolutionary alternative drink that was neither a beer nor a wine cooler, Zima ultimately turned a lot of people off, partly because it became a pop culture punch-line as a drink favored by “unmanly” men.

▼ A Mad TV sketch which exemplifies the Zima joke. The drink appears around the 1:51 mark.

In that way, Zima was very much a victim of its time, since such a stereotype probably wouldn’t stick these days. But back then its image, combined with its admittedly strange taste at first, caused sales to plummet soon after its launch.

To their credit, Coors still refused to give up on Zima and continued to reformulate its flavors and rebrand it well into the late 2000s. However, in 2008 the makers, who at this point were called MillerCoors, finally gave up and decided to pull the plug on the drink in the U.S. What may surprise many Americans though, is that Zima had simply faked its own death there. It actually moved production to China to start anew in foreign lands.

From 2007 to 2011 the brands made in China, such as P-Zima and the non-alcoholic Zimno, were fruity carbonated liqueurs available in pink and orange colors. From there, production moved to Vietnam and the varieties expanded even more. During this time, it seemed Japan of all countries took a particular liking to Zima.

▼ One of the many Japanese fans included our own Mr. Sato, who selected Zima for one of his home senbero adventures

The drink was first imported to Japan way back in 1997, but its marketing push here didn’t seem to really get into full swing until around the same time it was pulled in the US. Around the turn of the century, there hadn’t really been a dominant alcoholic drink in Japan. Sake and shochu had gotten a reputation as an old person’s drink by this point, and while beer was increasingly popular, its sales were hampered by high taxes and widespread consumption was mostly limited to weak pale lagers or worse at that time.

This was a perfectly unassuming environment for Zima to start a new life in, completely unfettered by its previous reputation. Sure enough, it flourished and was sold all over, but mostly in clubs and bars which sometimes proudly hung a large neon “ZIMA” sign in the window.

▼ Contrary to its previous image, Zima became the drink of choice for pro-wrestling legend and all-round übermensch Hiroshi Tanahashi

For well over a decade, Zima enjoyed a very comfortable life here and even started a robotic power trio in 2013. However, in 2020 when the COVID-19 pandemic hit, restaurants and bars were pressured to reduce their hours and in some cases completely suspend the sale of alcohol. This combined with increased competition here has caused its distributor Molson Coors Japan to go out of business, leaving no one to supply the country with Zima. The company made no public announcement but letters have been sent to business owners, informing them that Zima production ended in December, 2021.

▼ “Did you know Zima stopped selling??? I never drank it unless I went out to the clubs, but it’s sad…”

The twitter user above wasn’t the only one to lament the loss of Zima in Japan. Many others online expressed their sadness over the news as well.

“Seriously?! I’ll miss it…”
“I liked it because it was easy to drink.”
“When I was younger I couldn’t handle beer and always drank Zima.”
“I should have drank more while it was around…”
“Smirnoff just isn’t the same.”
“I liked the taste and look of Zima, but it was a little expensive.”
“I always saw Zima as a club drink, so I’m not surprised it was hurt so much by COVID-19.”

To clarify, Zima has not stopped selling in Japan quite yet. The remaining stock will continue to be sold, but the supply chain into Japan has been severed. At least this time we’ll get more of a heads-up than we did with 7-Up. Molson Coors Japan’s parent company Molson Coors said that they will consider the future of Zima, such as finding a new distributor for the Japanese market. Maybe this setback will also be an opportunity for the company to reconsider bringing Zima back to its home of the USA.

Times have certainly changed there, and both the social climate and alcoholic beverage market seem a lot more accepting of something like Zima now. Maybe after almost 30 years, and traveling halfway around the world, it can finally be embraced in the U.S. as zomething different. But if not, it’ll always be welcomed back in Japan with open arms.

Towards a Plurilogue of Cosmologies