How China Snuffed Out Threats Across Asia in 2021

SAN FRANCISCO, CALIFORNIA – China spent much of 2021 addressing threats across Asia with a growing sophistication – the result of economic clout and superpower status – that tolerated few compromises, Asia experts say.

In the diplomacy department, Chinese President Xi Jinping said in November his country would always be a ‘good friend and good partner’ to Southeast Asia, where some governments resent Beijing’s maritime expansion.

But between those overtures, the Chinese government passed its border law, which authorizes use of weapons along its 22,117-kilometer land boundary.

Last year, China got locked into a deadly standoff with India – still a source of tension despite talks in 2021. It also flew military planes into Taiwan’s air defense identification zone almost daily in 2021.

‘I think they have more tools in their toolkit and more levers to pull if they need to punish countries that are not abiding by China’s interests,’ said Derek Grossman, senior defense analyst with the U.S.-based Rand Corporation research organization.

Sino-foreign flaps came up throughout the year.

The 200-plus Chinese fishing boats that suddenly moored in a disputed tract of the South China Sea soured Beijing’s relations with rival claimant Manila early in 2021, for example, while the spread of civil unrest in Myanmar after the country’s military coup in February challenged China to stop rebels from spilling over its border. Taiwan stood its ground all year rather than negotiating over China’s goal of unification.

At an Association of Southeast Asian Nations summit in late November, Xi pledged to always be a ‘good friend’ to ASEAN to assuage the Philippines and three other claimants to the contested sea, analysts told VOA. A month earlier, Xi had advocated peaceful unification with Taiwan, a self-ruled island where polls show most citizens prefer autonomy.

China Says It Will Shun Hegemony in Disputed Asian Sea; Does It Mean That?

‘China’s behavior is not really historically new,’ said Eduardo Araral, associate professor at the National University of Singapore’s public policy school. ‘That has been always the behavior of rising great powers. ASEAN countries have a basis for their concern, for their worry, about the rise of China. That’s why President Xi’s assurances would probably be very much welcome.’

Filipinos noticed, said Aaron Rabena, research fellow at the Asia-Pacific Pathways to Progress Foundation in metro Manila. ‘The public, they’re quite skeptical. They’re not as receptive as the (Philippine) government when it comes to Chinese vaccines, but a lot in the public has received Chinese vaccines because they didn’t have much of a choice,’ he said. 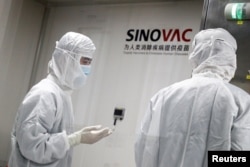 Pandemic diplomacy helped ‘burnish’ China’s image in much of the world, said Jeffrey Kingston, a history instructor at the Japan campus of Temple University.

Speedy help for Afghanistan was among China’s top achievements in 2021, Kingston added.

China intends to invest billions of dollars if the Taliban can guarantee security for Chinese workers and their assets, the Taliban’s acting deputy minister of information and culture said in October.

Taliban: China is Ready to Invest Billions in Afghanistan

Myanmar Junta Seen Cozying Up to China if West Gets Tough

China garnered less welcome attention around Asia and beyond largely for what became known as its ‘wolf warrior’ diplomacy, a widely used term that the think tank National Bureau of Asian Research defines as open expression of ‘controversial thoughts’ that may hurt bilateral relations.

‘The wolf warrior diplomacy has been a total failure in terms of projecting a positive image of China around the world,’ Kingston said. ‘All it’s done is generated anxiety in Asia, which basically has backfired on Beijing’s intentions.’

Beijing’s comments and military movement in Asia catalyzed a banding together by Western allies in favor of ASEAN’s South China Sea claimants, Rabena said, pointing particularly to a renewal of the U.S-Philippines Visiting Forces Agreement on military cooperation, which ensures the continuation of bilateral engagements with the armed forces of the Philippines that ‘range from expert exchanges’ to joint ‘training exercises,’ according to the U.S. Department of Defense.

Many European Union members hope China will follow United Nations maritime rules in the South China Sea to ensure consistency with other world waterways and to protect booming seaborne trade in goods with Asia.

Western countries have come together this year as well to support Taiwan, a fellow democracy, over China.

Why Western Countries Back Taiwan Despite Their Pro-China Policies

Fatigued by a 3-year-old trade dispute with the United States, hopeful of a zero COVID-19 caseload and intent on charting their own economic future, Chinese officials have turned on expatriates from much of the world over the past year by curbing immigration, analysts have told VOA.

That shift dovetails with the land boundary law, which took effect in October partly to stop infections coming from abroad.

What Does China’s New Land Borders Law Mean for Its Neighbors?

‘Clearly, the border closures and tensions with the U.S. and tensions with Europe are on their mind,’ said Ker Gibbs, president of the American Chamber of Commerce in Shanghai, who plans to spend much of his time in California from December onward partly because of the pandemic-linked border controls.

‘China wants a cooperative relationship with both major economies … and they’re having a struggle right now, frankly,’ he told VOA.

Going into 2022, the Winter Olympics in Beijing are expected to test China’s ties with the world following months of calls overseas for boycotts and U.S. President Joe Biden’s announcement that his country would not send diplomats. China’s response to the pileup of boycotts and how it would make Xi look overseas will be analyzed by China scholars in the weeks to come.

China: US Diplomatic Boycott of 2022 Beijing Winter Olympics Violates Spirit of the Games

Finland and Sweden now have a clear path to membership in the North Atlantic Treaty Organization, the alliance's Secretary General Jens Stoltenberg said Tuesday, as Turkey has withdrawn...

The Bank of Japan may have been saddled with as much as 600 billion yen ($4.4 billion) in unrealized losses on its Japanese government bond holdings earlier this...

Traditionally known for its shochu, a clear liquor made from grains, potatoes, sugar cane and more, Japan's southwestern region of Kyushu has become home to a budding whisky...

Rediscovering the Joy of Japanese Art in London

For the Tokyo gallery A Lighthouse called Kanata, simplicity can be deep and nuanced, and is, in essence, what defines Japanese art. It can also be reinterpreted, since...

Russia-China devastation the beginning of Japan.