TAIPEI, TAIWAN – China is showing off new sea-based technology as it seeks to assert its dominance in the Pacific, analysts say.

The latest technological tool is the Zhu Hai Yun, an unmanned and autonomously operated carrier for drones. A month into its maiden voyage, the vessel is billed as China’s first ‘intelligent’ drone carrier. It will carry out sea trials of equipment and aim to start operations by year’s end, the city of Zhuhai’s website says.

China is flexing its muscles at sea, and other countries are growing nervous, Jeffrey Kingston, history instructor at the Japan campus of Temple University, told VOA.

‘Essentially, it’s this continuation of an argument that’s been going on [for] some time, and now involving large numbers of drones,’ Kingston said.

Launched on May 18, the city says the carrier is ‘expected to bolster China’s marine scientific research and marine economy development.’ The Southern Marine Science & Engineering Guangdong Laboratory in the city of Zhuhai will operate the 88.5-meter-long ship.

The Zhu Hai Yun joins the country’s satellites, a bathyscaphe (deep-sea vehicle) and other equipment that China hopes will help the People’s Liberation Army-Navy gain an edge in regional maritime sovereignty disputes.

In 2017, Chinese scientists developed a deep-sea bathyscaphe and an underwater observation network to gather data on the world’s deepest seas, and analysts cautioned then of a military dimension. Space-based sensors ostensibly for research could spot enemy submarines.

China Has Capability to Use Space for Military Purposes, Experts Say

The Chinese Institution of Oceanology has developed underwater drones to gather geographic data in the territorial waters of other countries that give the military an advantage, according to the former director general of information systems with the Indian army, P.T. Katoch, who wrote in the New Delhi-based SP’s Naval Forces magazine. Katoch wrote that even unarmed, a Chinese drone ‘would be used to detect and track enemy submarines’ movements in order to attack them.’

China has exceeded all Indo-Pacific countries except Japan and the United States in maritime-related technology, said Alexander Huang, strategic studies professor at Tamkang University in Taiwan. He said China can handily outspend other countries in Asia. 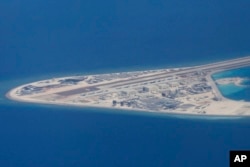 Beijing claims about 90% of the 3.5 million-square-kilometer South China Sea as its own, clashing with the claims of Brunei, Malaysia, the Philippines, Vietnam and Taiwan. Asian governments value the sea for oil, natural gas, shipping lanes and fisheries. Japan and the United States have urged China to leave the sea open for international use.

The Chinese embassy in Washington, D.C., did not answer a request for comment for this report.

Chinese officials have said in the past that its maritime technology is for scientific research or extraction of oil and gas. China’s state media China Daily reported last year that China’s leadership urged its scientists to come up with new innovations in ‘strategic frontiers,’ including the ocean.

Those officials hope to be seen around the Indo Pacific as a ‘science and technology power,’ said Aaron Rabena, a visiting fellow at the Singapore-based think tank ISEAS-Yusof Ishak Institute Regional Strategic and Political Studies Program.

‘I think it’s not just China, but other countries as well, are exploring ways to maximize the use of technology so that they can minimize the loss of human life on their part, so that’s the game right now,’ Rabena said.

The Philippines is looking toward a ‘modern and efficient up-to-date armed forces’ partly in response to Chinese deep-sea exploration, he said. Both the Philippines and Malaysia have announced plans over the past eight years to upgrade their navies in view of external threats.

Malaysia Buying Chinese Ships to Protect its Waters From China, Others

Research technology alone might not put China ahead of other countries militarily in a conflict, Huang cautioned. ‘I think they have pretty fast technology innovation and for some limited critical high technologies, they have significant achievements, but I cannot translate it into full-fledged integrated operational edge,’ he said.

Japan and the United States both moved this past week in ways that would counter China’s military might.

On June 8, Washington approved plans for the sale of warship parts and related technical support to Taiwan worth $120 million. The sale would be the latest aimed at helping Taiwan arm itself against China.

US Moving to Make Arms Sales to Taiwan More Routine

China’s Ministry of National Defense ‘strongly condemned and resolutely opposed’ the sale, according to the PLA’s China Military Online website.

Prime Minister Fumio Kishida of Japan, a country that has its own maritime disputes with China, pledged over the weekend at the Shangri-la Dialogue in Singapore to ‘fundamentally reinforce Japan’s defense capabilities within the next five years.’ Kishida said he would ‘secure a substantial increase of Japan’s defense budget.’

ola: Taken for a ride: how Ola, Uber promised the moon to drivers and failed to deliver