Terunofuji took the first step toward a third-straight championship by defeating komusubi Daieisho in a dogged effort on Sunday, the opening day of the 15-day New Year Grand Sumo Tournament.

In the day’s final bout at Tokyo’s Ryogoku Kokugikan, Terunofuji, coming off the first 15-0 record of his career in November, was under pressure from the get-go. But regardless of what Daieisho threw at him, the yokozuna kept his cool and eventually got the better of an exchange of throat shoves and slaps. 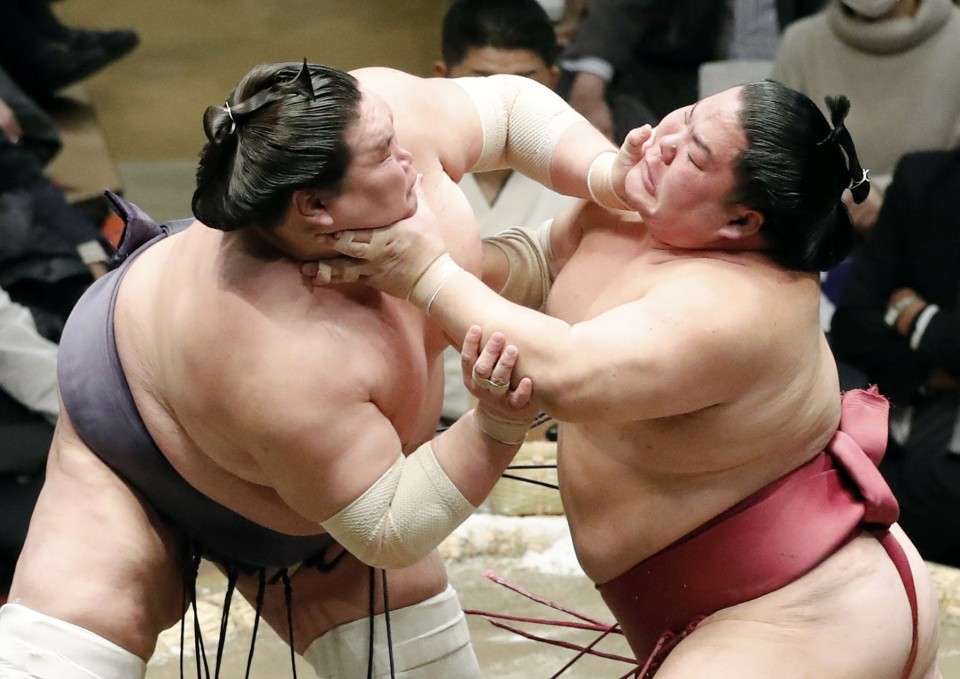 Terunofuji (L) battles with Daieisho on the first day of the New Year Grand Sumo Tournament at Tokyo’s Ryogoku Kokugikan on Jan. 9, 2022. (Kyodo)

Daieisho knocked the yokozuna back on the initial charge, latched onto Terunofuji’s extended right arm but failed to yank him down. The winner of last year’s New Year meet pressed his advantage and drove the yokozuna to the straw bales but could not finish him off.

The sustained high-energy effort appeared to wear on the komusubi, who was eventually slapped down to defeat as he charged forward once more.

Ozeki Shodai started his tourney with a narrow win. Shodai got the best of the initial charge against Mongolian No. 1 maegashira Kiribayama, but was outmaneuvered and forced to retreat. Despite being pressed backward, Shodai’s last-ditch armlock throw forced his pursuer to put a foot on the wrong side of the straw.

Takakeisho made it 2-0 for the ozeki rank with a less suspenseful bout, using his trademark shoving and thrusting attack to run No. 1 Wakatakakage out of the ring.

Sekiwake Mitakeumi, who won 11 bouts in November, shoved out tricky No. 2 Ura. Takanosho, meanwhile, tasted defeat in his first bout as a sekiwake since last May, wasting an early advantage against No. 3 and former sekiwake Ichinojo.

Meisei, demoted to komusubi after losing eight bouts as a sekiwake in November, was shoved out by veteran Mongolian No. 3 Tamawashi.

Oho, the grandson of the 32-time title-winning yokozuna Taiho, and son of former sekiwake Takatoriki, won his makuuchi-division debut, the No. 18 opening his account by shoving out Brazilian No. 17 Kaisei.

“I was incredibly nervous but it turned out OK. I generally have confidence going forward, as I did today,” Oho said.

Wakamotoharu, the older brother of dynamic No. 1 Wakatakakage, also had a winning debut. The No. 15 spoiled the makuuchi return of No. 14 Ichiyamamoto, who had spent the last tournament in the second-tier juryo division.

The other makuuchi returnee, No. 16 Tsurugisho, also lost, getting forced out by the Georgian former ozeki Tochinoshin, currently a 15th-ranked rank-and-filer.

Kate, Duchess of Cambridge, emerges as Britain's reliable royal as she turns 40