Tokyo on Friday reported 78 new cases of the coronavirus, the highest number since early October amid a gradual rebound in infections with the spread of the Omicron variant, bringing the nationwide daily tally to 510.

For 2021, the Japanese capital, which hosted the Olympics from late July to early August, saw a more than fivefold increase in COVID-19 cases from a year earlier to 322,766, according to the Tokyo metropolitan government.

Compared with many other countries, Japan’s confirmed COVID-19 cases in recent weeks have been much lower, but the community spread of the Omicron variant has been reported in areas including Tokyo and Osaka. Government officials and health authorities are urging people not to lower their guard against the virus during the New Year’s holiday season. 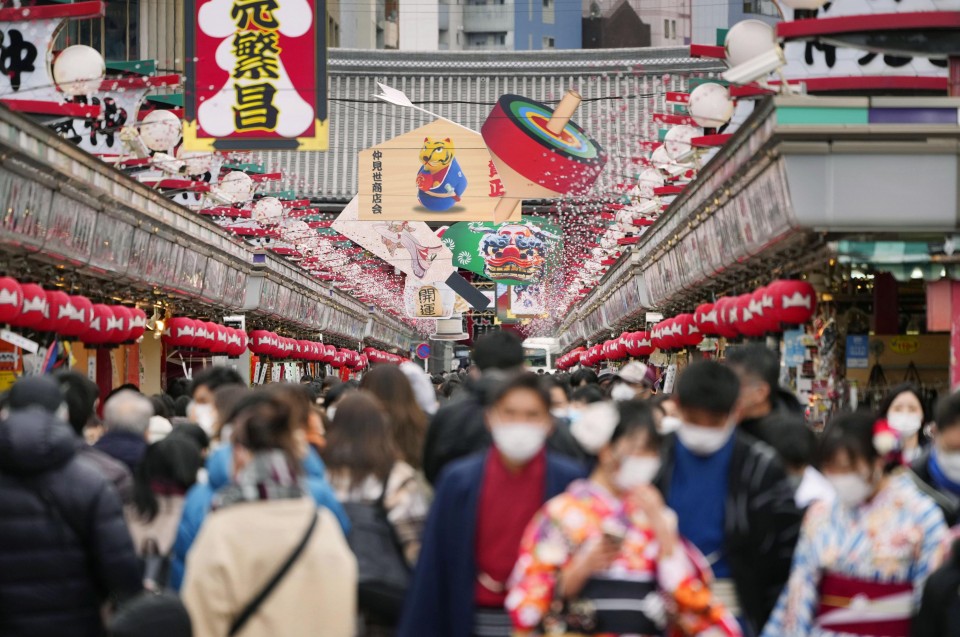 Nakamise shopping street in Tokyo’s Asakusa is crowded with visitors wearing face masks amid the coronavirus pandemic on Dec. 31, 2021, with the street decorated for New Year. (Kyodo) ==Kyodo

In Tokyo, the latest seven-day average of new infections stood at 54.3 per day, up 68.1 percent from the previous week. The daily count of 78 is the highest since 82 on Oct. 9, according to metropolitan government data.

The health ministry said separately that 72 people who arrived at Narita, Haneda and Kansai airports from overseas have been confirmed to be infected with the coronavirus.

Under tightened border controls, introduced in late November, the entry of foreign nationals from overseas has been banned but Japanese nationals and foreign residents can return to the country.

Before Omicron, the Delta variant led to a spike in infections. On Aug. 13, days after the Olympics, Tokyo had 5,908 cases, the highest on a daily basis.

August was the worst month with 129,193 cases confirmed, overwhelming the health care system, which compared with 923 in December.

A COVID-19 state of emergency was fully lifted in October, paving the way for economic activity to return.

But a woman in her 40s from Chiba Prefecture near Tokyo said, “I’m scared to see more people out here than I’d expected. I need to go home as soon as I’m done with shopping.”

As vaccinations against COVID-19 have progressed, the number of newly confirmed cases has trended downward. Japan initially lagged behind other advanced nations such as Britain and the United States in its inoculation efforts, but nearly 78 percent of the population has now received two shots of COVID-19 vaccine.

For 15 years, a hospital in southern Japan has been the only place in the country where a child can be anonymously and safely abandoned. Jikei hospital in...

Three anti-coronavirus drugs prescribed in Japan, including molnupiravir, may be effective against the omicron subvariant BA.5, according to a study published in the New England Journal of Medicine...

NEW YORK, July 20 (Xinhua) -- The U.S. dollar appreciated in late trading on Wednesday, while the euro declined, as market participants awaited a key rate decision from...

NEW YORK, July 19 (Xinhua) -- The U.S. dollar fell in late trading on Tuesday as the euro rallied on the chance of a big rate hike by...