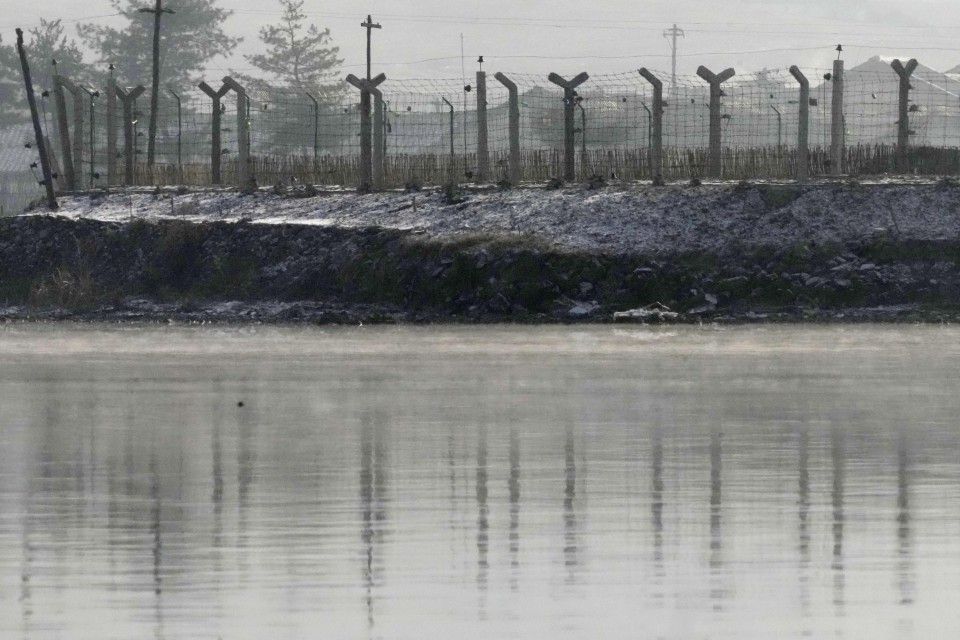 Photo taken from the Chinese city of Dandong in late December 2021 shows fences set along the Yalu River on the North Korean side. (Kyodo) ==Kyodo

TOKYO – The Tokyo metropolitan government reported 76 new coronavirus cases on Wednesday, making it the first time in over two months that the daily tally has exceeded 50.

The latest seven-day average of new infections stood at 44.9 per day, up 57 percent from the previous week, according to the metropolitan government.

SEOUL – South Korea conducted a regular military exercise last week for the defense of a disputed pair of islets it controls in the Sea of Japan, Yonhap News Agency reported Wednesday.

The Defense Ministry has withheld information regarding the reported drills, apparently to avoid heightening tensions with Japan, which regards the islets as part of its territory and calls them Takeshima. South Korea calls the outcroppings Dokdo.

TOKYO – Prime Minister Fumio Kishida safely navigated a general election in 2021 as new leader of Japan’s ruling party, but when he faces voters again in the 2022 upper house election, he is likely to be judged on his diplomatic skills and ability to realize his vision of narrowing the gap between rich and poor.

Three months into his tenure, Kishida has been building a new leadership image by repeatedly stressing his “ability to listen” to people and trying to differentiate himself from his predecessors Yoshihide Suga and Shinzo Abe, who were both known for their top-down approaches.

The police’s National Security Department made the arrests under the city’s Crimes Ordinance, according to a police statement. Local media reported that acting editor-in-chief Patrick Lam and former chief editor Chung Pui-kuen were among the arrested.

China complains to U.N. of “close encounters” with SpaceX satellites

BEIJING – China has complained to the United Nations that satellites from SpaceX, a U.S. space firm founded by Tesla Inc. CEO Elon Musk, had “close encounters” with its space station, urging Washington to respect the international order of outer space.

Tesla, a U.S. electric vehicle maker, has been trying to boost its business in China with a population of 1.4 billion. Following the Chinese claim, Musk and his companies have come under a barrage of criticism on the Chinese microblogging site Weibo.

NEW YORK – A U.N. conference on nuclear nonproliferation scheduled for next month is expected to be postponed again amid the surge of the Omicron variant of the novel coronavirus, diplomatic sources said Tuesday.

The gathering to review the Treaty on the Non-Proliferation of Nuclear Weapons was scheduled to be held Jan. 4 to 28 in New York after repeated postponements from its original date in 2020 due to the pandemic.

WASHINGTON – The United States has logged an all-time high of over 440,000 daily coronavirus cases as the Omicron variant circulates in the holiday season, data by the Centers for Disease Control and Prevention showed Tuesday.

But CDC data also suggests that Omicron had not been sweeping the country as much as expected earlier, with the estimated proportion of new cases accounted for by the highly transmissible strain in the week through Dec. 18 sharply revised downward to 23 percent from 73 percent.

TOKYO – A 9-year-old boy was found dead after an apparent fall from a Tokyo hotel Wednesday morning, with police questioning his mother on suspicion of murder.

A police officer found the child lying on the ground on the hotel’s premises in Kabukicho, Shinjuku Ward, after hearing a loud noise at around 7 a.m., the police said.

U.S. and China holding talks on cleaning of planes after flight aborted