by 198 Japan News
in JAPAN AFRICA NEWS
Reading Time: 2 mins read
A A
0

Japan and Argentina on Thursday condemned Russia for its ongoing invasion of Ukraine, while pledging to work together in responding to global food and energy price surges.

During their meeting on Indonesia’s Bali island on the fringes of the Group of 20 gathering, Japanese Foreign Minister Yoshimasa Hayashi and his Argentine counterpart Santiago Andres Cafiero shared the view that Russia’s aggression is a unilateral change of the status quo by force and a clear violation of international law, according to the Japanese Foreign Ministry. 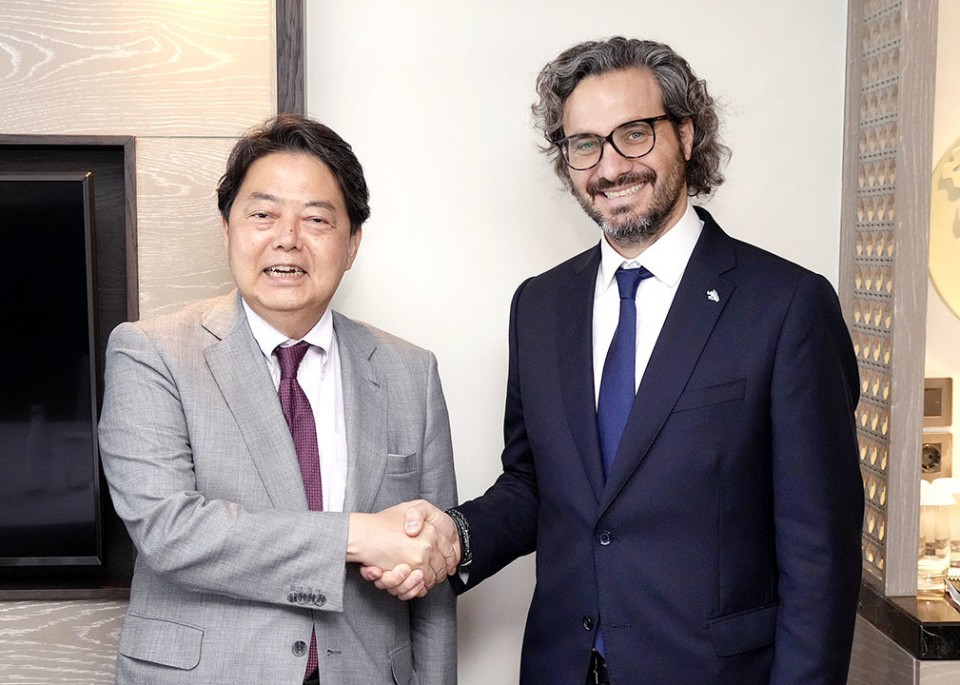 The talks came after Argentine President Alberto Fernandez reportedly said late last month that he wishes his nation to become a member of the BRICS forum, consisting of Brazil, Russia, India, China and South Africa, when he attended its meeting online.

Argentine voted for a U.N. General Assembly resolution condemning Russia’s aggression against Ukraine in March, which was adopted with the approval of 141 members. But the South American country has not joined Western nations and Japan in imposing severe economic sanctions on Moscow.

The two ministers also pledged to work together to mitigate the impact of rising prices of food and energy, the Foreign Ministry said. Argentina is one of the world’s major grain producers.

Foreign ministers from the G-20 major developed and fast-growing economies are meeting in Bali on Thursday and Friday.

The BRICS have supported Moscow’s participation in G-20 gatherings, including Russian President Vladimir Putin’s planned attendance at a summit in November, while the United States has opposed it.

Later in the day, Hayashi held talks with his Australian counterpart Penny Wong. They pledged to steadily enhance their cooperation in the security and defense fields, the Japanese Foreign Ministry said.

The two agreed on the importance of the U.S. engagement in the Indo-Pacific region, where China has been intensifying its military activities, and vowed to ensure Washington’s presence through frameworks such as the Quad grouping also involving India, the ministry added.

Hayashi also met with his Dutch counterpart Wopke Hoekstra, and they shared the view that Russia’s invasion of Ukraine is an “outrageous act that undermines the foundation of the international order,” according to the ministry.