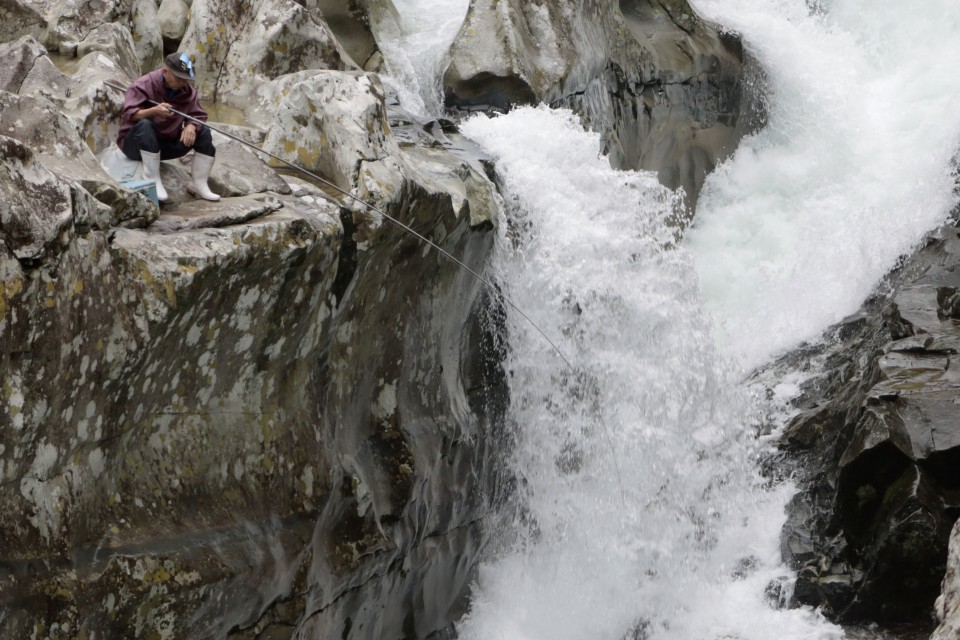 A fisherman drops a line from a rocky cliff into an 8-meter-high waterfall in Kozagawa in Wakayama Prefecture, western Japan, on June 16, 2022, to catch ayu sweetfish swimming up the Kogawa River with a traditional fishing technique that uses only hooks and sinkers without bait. (Kyodo) ==Kyodo

TOKYO – Japan’s top court on Friday dismissed claims that the government should pay damages in cases involving around 3,700 people whose lives were seriously affected by the 2011 Fukushima nuclear disaster, absolving the state of responsibility for the crisis that led to mass evacuations.

The decision by the Supreme Court’s Second Petty Bench was the first for the top court and covered four lawsuits filed in Fukushima, Gunma, Chiba and Ehime prefectures. Around 30 such lawsuits have been filed across Japan by people who had to evacuate from their homes or whose lives were greatly impacted by the earthquake- and tsunami-triggered disaster.

TOKYO – The Bank of Japan on Friday maintained its ultraeasy monetary policy in defiance of growing market pressure to tweak it, unfazed by the prospect of further yen weakness as it lags far behind major peers forging ahead with rate hikes to fight inflation.

Still, Governor Haruhiko Kuroda warned that the recent sharp depreciation of the Japanese currency is “negative” for the economy and the central bank will closely watch foreign exchange moves, after the no-change decision at a two-day policy meeting sent the yen sharply lower against the U.S. dollar.

Japan gov’t to allocate up to 476 bil. yen to TSMC chip plant

TOKYO – The Japanese government will allocate up to 476 billion yen ($3.6 billion) for a Taiwan Semiconductor Manufacturing Co. subsidiary to use in funding the ongoing construction of a plant in southwestern Japan, the industry minister said Friday.

In a bid to secure a stable supply of chips, the government backed the plan by Japan Advanced Semiconductor Manufacturing Inc., a joint venture of TSMC, Sony Semiconductor Solutions Corp. and Denso Corp., to set up the factory in Kumamoto Prefecture, industry minister Koichi Hagiuda said.

TOKYO – Tokyo stocks ended sharply down Friday, with the Nikkei closing at a one-month low, following sell-offs in international markets overnight on fears over the adverse global economic impact of monetary tightening by U.S. and European central banks.

The benchmark Nikkei index lost 1,861.29 points in the five trading sessions through Friday, recording its largest weekly decline since March 9-13, 2020, when stocks plummeted in the early days of the coronavirus pandemic.

Japan’s defense chief to hold talks with ASEAN in Cambodia

TOKYO – Japanese Defense Minister Nobuo Kishi said Friday he will hold a meeting of defense ministers with the Association of Southeast Asian Nations next week in Cambodia, part of efforts to keep close tabs on China’s growing maritime assertiveness in the region.

“This is a meaningful opportunity to exchange views on security issues in the Indo-Pacific region. I hope to promote mutual understanding and trust,” Kishi said at a press conference, adding that Japan intends to maintain and strengthen a “free and open” Indo-Pacific region.

BEIJING – China launched a new aircraft carrier “Fujian” on Friday in Shanghai, state-run media reported, with it adding a third such vessel to its fleet amid intensifying security tensions with the United States and Taiwan.

The Fujian, named after Fujian Province in the country’s southeast, is China’s first fully domestically developed carrier with aircraft catapults, according to the Global Times, a tabloid of the ruling Communist Party.

SYDNEY – Solomon Islands Prime Minister Manasseh Sogavare assured Australia on Friday that there will be no regular Chinese military presence in the country, following the signing of a controversial security pact between China and the South Pacific island nation.

The agreement signed in April reportedly allows the deployment of Chinese police, military and other armed personnel, as well as the docking of the Asian nation’s ships in the islands, stoking concerns in Australia, the United States and other countries of a permanent Chinese military presence in the region.

SEATTLE – Shohei Ohtani threw six shutout innings and extended his hitting streak to 11 games Thursday to lift the Los Angeles Angels to a 4-1 win over the Seattle Mariners.

Delivering another sterling two-way performance, the reigning American League MVP struck out six, limited Seattle to three hits and a pair of walks and batted 2-for-4 as the designated hitter.