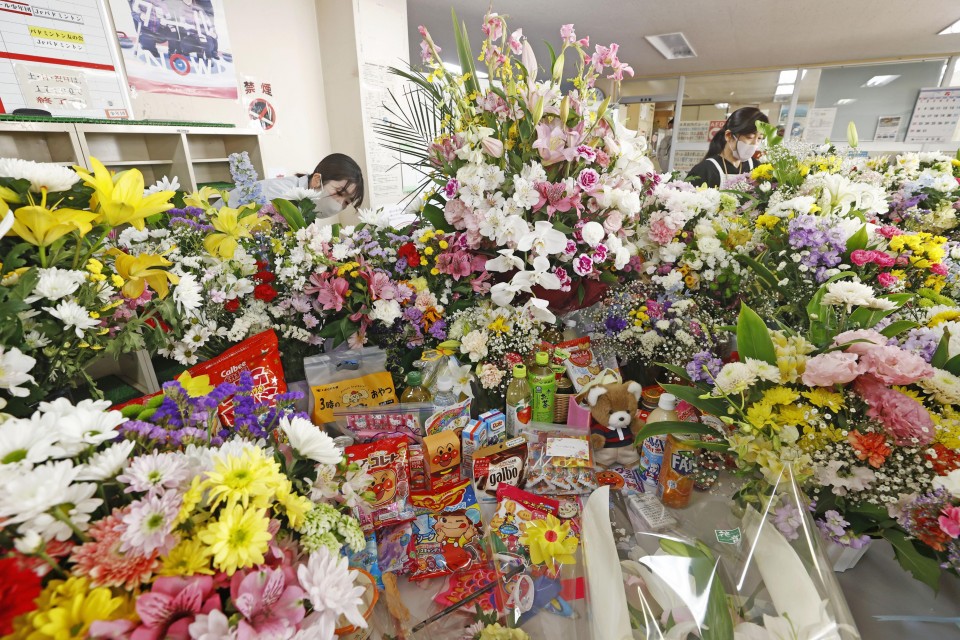 Piles of flowers left in honor of people killed in a tour boat accident off Hokkaido’s Shiretoko Peninsula are seen at a flower stand in the town of Shari, northern Japan, on May 10, 2022. (Kyodo) ==Kyodo

TOKYO – Japan’s government is arranging to double the cap on arrivals from overseas to 20,000 people per day in June, government sources said Wednesday.

The relaxation is expected to go ahead following an examination of airport quarantine infrastructure and the state of domestic infections after Japan’s Golden Week holidays that ended last Sunday.

TOKYO – Wearing masks outdoors to protect against the coronavirus is not necessary providing social distancing is practiced, Japan’s top government spokesman said Wednesday, with the approach of summer increasing the risk of heatstroke.

At a meeting held in Seoul, members of a cross-party group of Japanese lawmakers dedicated to promoting exchanges between the two neighbors, and their South Korean counterparts shared their hopes that the launch of the new administration will be “a starting point” toward a better bilateral relationship.

The world’s biggest automaker by volume posted a net profit of 2.85 trillion yen in the year ended March 31, up 26.9 percent from the previous year, as sales climbed 15.3 percent to 31.38 trillion yen.

TOKYO – Japan’s House of Councillors on Wednesday enacted into law a bill for enhancing the country’s economic security amid increasing geopolitical risks associated with Russia and China.

The four pillars of the new law include strengthening supply chains to stably procure semiconductors and other vital products as well as facilitating the development of artificial intelligence and other cutting-edge technologies through public-private cooperation.

U.S. believes Ukraine war has not emboldened China to move on Taiwan

WASHINGTON – Russia’s war in Ukraine has not emboldened China to attack Taiwan, the top U.S. intelligence chief indicated Tuesday, given Moscow’s limited progress in the invasion and the unity shown by the West in imposing sanctions.

The U.S. intelligence community has so far “not assessed that the Russia-Ukraine crisis is likely to accelerate their plan vis-a-vis Taiwan,” Director of National Intelligence Avril Haines told a Senate committee, while adding China is likely to be still evaluating and taking lessons from events in Ukraine.

Xi tells Macron “bloc confrontation” should be avoided over Ukraine

BEIJING – Chinese President Xi Jinping on Tuesday told his French counterpart Emmanuel Macron that “bloc confrontation” over Ukraine should be avoided, state-run media reported, as Russia’s military operations in its neighboring country have been escalating.

Xi’s remarks came as Western democratic countries, including the United States and European nations, work to bolster the sanctions they have imposed on Russia since its invasion of Ukraine started on Feb. 24.

NAGOYA – Toyota Motor Corp. said Tuesday it will suspend operations on 14 lines at eight factories in Japan for up to six days this month as it is difficult to procure parts due to the prolonged COVID-19 lockdown in Shanghai.

With the plan, Toyota said its global production for May will be reduced to about 700,000 vehicles from its previous target of 750,000.

Shohei Ohtani allowed one unearned run in seven dominant innings and had the go-ahead hit in the Los Angeles Angels’ 5-2 victory over the Miami Marlins on Wednesday...

Shohei Ohtani delivered another sparkling performance on the mound and at the plate Wednesday, leading the Los Angeles Angels to a 5-2 win over the Miami Marlins. The...

Washington , July 7 (ANI): Hollywood actors Reese Witherspoon and Will Ferrell are headed to the altar in a new wedding comedy for Amazon Studios. According to Variety,...

The warning from Seoul comes amid fears of a North Korean nuclear ?provocation?South Korean President Yoon Suk-yeol has threatened a swift response to any "provocations" from Pyongyang, telling...

Ending the war of attrition in Ukraine

The controversial candidates in the Philippines presidential election – BBC News

Russia is aware it is not winning the war in Ukraine: Brookings senior fellow

SoftBank’s Rajeev Misra to step back to launch new fund