by 198 Japan News
in JAPAN POLITICAL NEWS
Reading Time: 8 mins read
A A
0 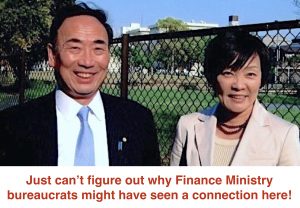 SNA (Tokyo) — The Moritomo Gakuen school affair was the first of the major scandals that shook the government of Shinzo Abe beginning in February 2017. The following is a working timeline which the Shingetsu News Agency intends to fill out and update in the weeks and months ahead.

The original draft was compiled by Gabrielle Fournier Connell, but revisions and additions have been made by Michael Penn and others.

November: Saeko Tani, aide to the first lady, makes contact with the Finance Ministry on Akie’s behalf during the land price negotiations.

December: Construction of the Mizuho no Kuni elementary school begins.

February: Asahi Shinbun breaks the story that Moritomo Gakuen bought government land for a fraction of the price of comparable plots. In regard to suspicions of his involvement, Prime Minister Shinzo Abe tells the Diet that he will resign as prime minister and as a Diet member if it turns out either he or his wife were involved with the Moritomo Gakuen land sale.  Chief Cabinet Secretary Yoshihide Suga holds talks with officials of the Finance Ministry’s Financial Bureau. Four days later, the land sale documents begin to be altered, deleting references to Akie Abe and others. Akie steps down from her role as honorary principal.

March: In sworn Diet testimony, Moritomo Gakuen Principal Kagoike declares that he had received a 1 million yen (about US$9,400) cash donation from the prime minister via his wife Akie. Finance Ministry official Nobuhisa Sagawa falsely testifies in the Diet that all documents pertaining to the land sale are no longer available in the ministry. Finance Minister Taro Aso declares that the land sale was carried out with proper procedures and pricing. Construction of the Mizuho no Kuni elementary school is suspended.

June: The Osaka District Public Prosecutor’s Office stages overnight raids on Moritomo Gakuen offices on suspicion of defrauding authorities to receive subsidies. In one of the searches, the prosecutors away about a hundred cardboard boxes of seized items.

July: Nobuhisa Sagawa appointed the head of the National Tax Agency. Yasunori and Junko Kagoike are arrested on fraud charges and kept in custody.

March: Asahi Shinbun breaks the story that the Finance Ministry may have altered official documents related to the land sale. Toshio Akagi, a regional Finance Ministry official from section overseeing the land sale is found dead in an apparent suicide. Nobuhisa Sagawa resigns as National Tax Agency chief resigns later that same day. The Finance Ministry reluctantly admits that it had altered official documents, including the deletion of references to Akie Abe and several other politicians. Nobuhisa Sagawa gives his testimony in the Diet in which he tried to clear Abe and claimed his own legal jeopardy prevented him from speaking freely. Construction company officials say they were pressured to inflate the volume of waste on state-owned land that was later sold to Moritomo Gakuen.

May: The Finance Ministry submits 950 pages of original documents to the Diet, covering the period from June 2013 to June 2016, which Nobuhisa Sagawa had previously testified did not exist. Yasunori and Junko Kagoike freed on bail after ten months in custody. Osaka prosecutors announce they would not try to indict Sagawa. Prime Minister Shinzo Abe says he does not need to resign because neither he nor his wife accepted bribes, moving the goalposts from his original declaration of total noninvolvement.

June: Finance Ministry announces disciplinary measures against twenty officials involved in falsifying official documents related to the land sale. Taro Aso returns a portion of his salary but reiterates that he will not step down. A citizens group petitions for Sagawa to be indicted. Board of Audit says that it will conduct a second investigation of the land sale.

July: Shigeaki Okamoto appointed Vice-Minister of Finance. He was in the Foreign Minister’s Secretariat in charge of document management at the time of falsification of the official documents. The post of Commissioner of National Tax Agency, which has been vacant since Norihisa’s resignation in March, is filled by Takeshi Fujii.

August: The ruling party refuses opposition party demand to file accusation against Nobuhisa Sagawa regarding his alleged false statements at the Budget Committee of the House of Representatives on March 27. The Ministry of Finance submits to the Diet reports on document falsification which contradict Nobuhisa Sagawa’s statements.

November: The Board of Audit submits a report on re-inspection of official document falsification at meeting of the Budget Committee. It points out that the falsification was led by Nobuhisa Sagawa, who was the Director-General of the Financial Bureau when the falsification occurred.

March: The trial on Yasunori and Junko Kagoike begins at the Osaka District Court on a the charge of having used deception to obtain a total of ¥170 million, including national subsidies. Yasunori Kagoike criticizes his prosecution and arrest, describing it as a national conspiracy. The Osaka First Committee for the Inquest of Prosecution resolves not to agree with the decision of the Osaka District Public Prosecutor’s Office. The Prosecutor’s Office, in May 2018, had decided not to prosecute ten officials suspected of having been involved in Moritomo Gakuen scandal. Amongst the ten, six were officials of Financial Bureau, including former Director-General Nobuhisa Sagawa. The other four officials include three officials of the Kinki Local Finance Bureau and an official of Osaka Civil Aviation Bureau of Ministry of Land, Infrastructure, Transport, and Tourism, who were allegedly involved in selling of the state-owned land with a ¥800 million discount. However, the judgement of the Osaka First Committee for the Inquest of Prosecution lacks the ability to compel the Osaka District Prosecutor’s Office to act.

April: A citizen’s organization calling itself the Group of Citizens to Defend the Constitutional State submits an application aiming to push the Osaka District Public Prosecutor’s Office to prosecute the officials involved in the Moritomo Gakuen scandal, including the former Director-General of the Financial Bureau Nobuhisa Sagawa, on charges of having discarded official documents.

May: The Osaka District Court rules that it was illegal for the Kinki Local Finance Bureau to have initially refused to disclose the price at which the state-owned land was sold to Moritomo Gakuen. On the other hand, the court also rules that it was reasonable for the bureau not to have disclosed the reasons for the ¥800 million discount. The judge explains that it may have harmed the interests of Moritomo Gakuen if the bureau disclosed information about the buried garbage.

June: Makoto Kimura, a member of Toyonaka City Council, Osaka Prefecture, appeals to the Osaka High Court regarding parts of judgment made by the Osaka District Court.

August: The Osaka District Public Prosecutor’s Office decides once again not to prosecute the ten officials suspected of having been involved in the Moritomo scandal, including Financial Bureau Director-General Nobuhisa Sagawa.

November: The Ministry of Finance and the Ministry of Land, Infrastructure, Transport, and Tourism disclose 5849 pages of official documents related to the selling of the state-owned land with the ¥800 million discount. The ministries had refused to disclose these documents in August 2018. This earlier refusal was found to be illegal by the Information Disclosure and Personal Information Protection Review Board of the Ministry of Internal Affairs and Communications in June 2019. Even still, some parts of the released documents are blacked out.

December: The Osaka High Court rules that it was illegal for the Kinki Local Finance Bureau not to have disclosed the reasons for the ¥800 million discount.

February: The Osaka District Court sentences former President of Moritomo Gakuen Yasunori Kagoike to five years in prison on charges of having committed fraud to receive subsidies from the national government, Osaka Prefecture, and Osaka city. HIs wife Junko Kagoike is sentenced to three years in prison.

March: The widow of Toshio Akagi of the Kinki Local Finance Bureau files a lawsuit against the national government and the former Director-General of Financial Bureau Nobuhisa Sagawa for ordering her husband to participate in the falsification of official documents. Her lawyer discloses notes in which Akagi wrote that Financial Bureau was responsible for the falsification and the instructions came from Sagawa. Akagi left these notes just before he committed suicide.

June: The widow of Toshio Akagi submits to the Cabinet Secretariat a petition for reinvestigation of the falsification of official documents. She has had collected more than 352,000 signatures in support of her petition. Minister of Finance Taro Aso immediately replies that he does not intend to reinvestigate the matter.

October: The lawyer for Toshio Akagi’s widow makes public an audio tape in which Akagi’s former supervisor explained the details of the discount and falsification of official documents. In the audio tape, the supervisor admitted that the assessment was insufficient to legitimate the discount and that the falsification was by instruction of Nobuhisa Sagawa, the former Director-General of the Financial Bureau. On the other hand, he denied that there was any consideration for former Prime Minister Shinzo Abe. The supervisor also stated that Toshio Akagi had left behind a file, which would come to be known as the “Akagi File,” in which details of the falsification were provided. The widow demands that the national government release the file, to which the national government quickly answers that there is no need for them to do so.

November: The Research and Legislative Reference Bureau of the National Diet reveals that, in the Diet between February 2017 and July 2018, the Abe administration made a total of 139 false statements in answering questions about the falsification of official documents in the Moritomo Gakuen case.

May: The national government acknowledges the existence of the Akagi File, which includes documents detailing the process of the falsification of official documents. The government promises that it will submit the file at a later date.

To be expanded and continued…

An earlier version of this timeline was contributed by Gabrielle Fournier Connell. Support also provided by Michael Penn.

Get the feeling that your news services aren’t telling you the whole truth? That’s what happens when they get their operating money from governments and business corporations. SNA relies exclusively upon its subscribers in order to remain fully independent. Please support fearless and progressive media in Japan through Patreon.